Valley of the Sun (Audio Dramatization) 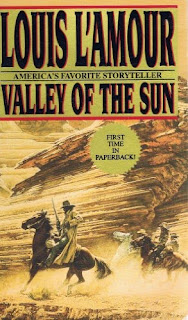 I know that the first thing you'll probably notice is how the title above says "Audio Dramatization," but the picture to the left has a little "First time in paperback!" stamp. Before you fully discredit me, please know that the only audio copy I have of "Valley of the Sun" is an mp3 download—as such, I had no physical cover to scan into my computer, and so was left with whatever I could find. I found the image to your left on some website and, as there is nothing worse than not opening a blog entry with a picture, opted to include it.

Luckily, this audio production was more interesting than the paragraph you just read. It wasn't the best I've listened to, but it kept my attention well enough. Basically, a ranch hand on his way back from a big cattle sale is ambushed and robbed by a former coworker and a couple of his sketchy accomplices. The rest of the story is about how he battles adversity to serve justice and clear his name with the woman he loves. Standard stuff, but entertaining. Recommended.
Posted by Chris at 5/04/2011 26 comments:

Having some fun playing with some features that are new to blogger since I last called it quits. Not sure if this will be the final look, but there's a lot more you can do with the layout than you could when I started way back in 2008. I'll keep fiddling with it until I get it how I like. In the meantime, listen to this song by Kurt Elling—it rules.
Posted by Chris at 4/20/2011 2 comments:

Back, sort of maybe

Been awhile. But I think it’s time to start writing again. The fact is that I’ve missed it, and as of recently I can’t really think of a reason not to. If you ever read this blog, you know that I started out reviewing Louis L’Amour stories, then expanded it to include other stuff while mostly focusing on L’Amour. I want to continue doing that—only thing is, since it’s been so long, everything I ever wrote is gone, with the exception of the few posts I wrote when I changed the blog to Red Horse Reboot. Not sure if I’ll keep that name—or, honestly, how long I’ll continue writing. That’s why I’m refraining from making a big declamatory “I’m back!” and you all add me to your blog rolls, then I stop writing and you think, “Huh?” So, anyway, look for something kind of soon. Not sure what the content will be, but you’ll find it here, at least for the short term.
Posted by Chris at 4/18/2011 3 comments:

I've been reading a lot of Star Wars "Expanded Universe" novels of late, and though I haven't read Terry Brooks' contribution to that series (the novelization for Episode 1: The Phantom Menace), his name was on my radar as "one of those Star Wars writers." A couple of months ago, I decided I really wanted to check out a fantasy novel. I knew Brooks was well-known in that genre, so I went to my library, found Magic Kingdom for Sale—Sold!, and check it out. But I never finished it.

It's a story about a talented but disillusioned big city lawyer who, in the wake of his wife and child dying in a car accident and the subsequent depressive bouts he endures, follows through on a strange opportunity: a magic kingdom is being sold from a high-end Christmas catalog his had subscribed to. It's not cheap, but he has enough money, and even though he has tons of questions regarding the plausibility of such a venture, he buys it. Then he goes there, and that's when I lost interest. I think it was the bumbling, absentminded wizard who accompanies the main character upon his arrival to the magic kingdom that was the last straw for me.

I really wanted to like this one, but couldn't get into it. Anyone read it? Finished it? Liked it? Am I missing something?
Posted by Chris at 5/28/2010 2 comments: 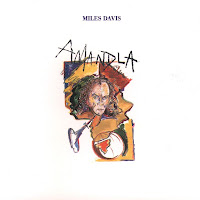 The following entry is part of Scott Parker's Forgotten Music series.
I have an interesting history with this album. I bought it a few years ago after already exploring most of Miles Davis's output from the 50s through 70s. At first I was sort of reticent about picking up anything Miles made in the 80s. Didn't he, like, start playing synthesizers and stuff, and copping Cyndi Lauper tunes, and making ridiculous-looking album covers? Well, yeah, but at a certain point I shifted my thinking from "I'm going to trust what seems to be the prevailing opinion that no '80s Miles is good" to "Why don't I listen for myself and see what I think?"
I'm glad I shifted my thinking. Amandla is a good album. Not Kind of Blue good or even Live Evil good, but you know what? According to my iTunes, I've listened to Amandla more than any other Miles album over the past year. And though it didn't immediately reveal its quality to me like some of Miles' earlier work, it worked its spell on me well enough over time. It's an interesting album in that I never remember much about it other than the mood I feel when I listen to it—but that's cool. It's the kind of album I put on while I'm washing the dishes, and every once in awhile Miles' trumpet pierces through the din, and it's just kind of nice. Not that it doesn't reward a closer listening; it totally does. Lots of interesting electronic elements happening amidst some solid group interplay, some memorable playing from Miles for how late in the game it was for him at that point, and worthy contributions from sidemen like Kenny Garrett, Joe Sample, and George Duke—seriously, the personnel on this album reads like a who's-who of world-class studio musicians.
I was going to conclude this entry by saying "If you've never listened to Miles Davis before, don't start with this," but now I'm kind of rethinking that. Fact is, I only know one other person who even knows about this album. How about this? If you're interested in moody, intelligent instrumental music and don't care about whether people think you're lame for listening to '80s Miles, check this out. If you don't like it the first time, wait awhile and throw it on again. If you don't like it again, wait some more, then check it out. I'm a big proponent of giving music lots of chances to break through, and Amandla definitely is worth a shot.

For some reason, I've had a snippet of the theme song from a long-defunct TV show called High Mountain Rangers stuck in my head all day. In his book Musicophilia, Oliver Sacks tells us that these occurrences are actually little seizures, and can be effectively overcome by listening to the whole song. Thanks to the glory of the Google, I found a link to the opening of this late-'80s relic in a few seconds. Then I watched it, and the song isn't really stuck in my head anymore. So I guess Sacks might be on to something. But the real questions are:
1) Is this a good TV theme song?
2) Do you remember this show at all?
Personally, I like the song. It's predictable as could be, but something about it just works for me. I did grow up not far from where the show was filmed (Sierra Mountains), though, so there could be a warm nostalgia factor that's fogging my view. In other words, would I like it if hearing it didn't "take me back" to my childhood? Not sure. But I am pretty sure that the clip of the two guys on horses moseying down the city street rules. Your thoughts?
Posted by Chris at 5/20/2010 8 comments: